I’m new to larping in general and September will be my first event. I’m planning on joining Dawn as a Knight Errant.
I was wanting to run the following backstory and want to check it’s acceptable. (Condensed)

I’m originally from The Marches, but I fell in love with a dawnish maiden. We wish to be wed but her father will not allow her to marry anyone but a dawnish noble. I became a Knight Errant for the glory of love!

Also, this is my outfit. Is it ok? 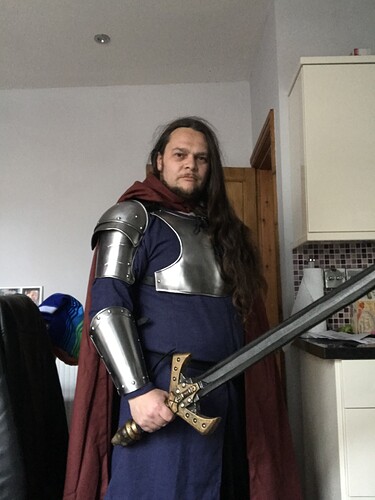 Welcome along, to the hooby, the game, and these forums!

Backstory looks interesting, bear in mind that you’d have to (a) move to Dawn and then (b) get a Test of Mettle… but doing it all for love is very Dawnish

A short simple backstory is a good idea anyway. Do you know what your Test entails, and who set it?

Outfit looks pretty good, simple and effective… could use a little more bling, and you might want the Dawnish colours (golden sun on blue) in there somewhere.

I’m not sure you’ll get the full benefit of the heavy armour with that rather short breastplate (is there a backplate as well?) but that’s a different issue.

Bear in mind that battles are only a shortish part of the weekend, and you may want to make your kit a bit more fancy when not wearing all the tin cannery.

A brighter cloak would help if your budget will stretch - brightly coloured opulence is what you’re after for Dawn.
Some jewellery, necklace, circlet, fancy belt can probably be hunted form charity shops.
Adding a line of trim to the surcoat too might help - best put on with a machine if you’re wearing the armour over it, but it’s pretty simple job if you have anyone who can sew. Worth buying a whole reel of trim - you’ll need 4-5 m to do the edges but the spare can be used on cloak, banner, tankard to tie things together as yours. Something metallic with flowers would be great.

If you know the colours of your romantic interest’s House you could add a favour from them in those colours to indicate your back story. Is your interest being coming to Anvil as another player or are they off screen?

Thanks for the advice.
I have a burgundy thonged shirt for out of battle, but the cloak was the best colour I could get. I wanted to go red and blue but so much was out of stock.
I’ll check some charity shops (my town is 20% charity shops) and get some brooches and adornments for the outfit. I figured the muted colours would add to my backstory as I’m trying to cross over into Dawn rather than being brought up there. As for heraldry, as in the yellow sun, I’m not exactly experienced with sewing (yet) so I’m at a loss as how to add such things. Probably should look up some youtube videos. I have a 3-4 months to prepare so plenty of time to make alterations.
As for my test of mettle, I feel like I would like to try and join an already existing house if possible. Some friends were supposed to be joining me as this was my choice for a stag, as I am actually getting married next year irl, (Hence my choice of background) but at this point it’s either going to be one friend or me alone, so I’m hoping to make some friends at the event.
Also, I don’t want to over spend in the unlikely event that this will also be my last event.
My future wife will not be joining us, she’s not into this kind of thing like I am, but she is accepting of it and thinks I look, ahem… nice in the armour.
Oh, and yes, the armour has a backplate too. I need some padding for the shoulders though. It cuts in a little bit. I didn’t want full heavy armour as it restricts movement and I prefer agility over stalwart defence.

On a side note, I feel my love’s father would be actively trying to prevent my progress and so would give me an impossible task were I to take my test of mettle from their house.

Re charity shops: look for braid, look for costume jewellery, look for simple, bright patterns. Check the womens sections as well, for materials.

In terms of the heraldry, you can do pretty well with fabric or acrylic paint, just painted over (repeatedly, sometimes) onto a piece. A sash or a belt tag if not a tabard.

So your character plan is (a) join Dawn, (b) attain a rank of Noble in House B (c) marry the pretty girl from House A, from a position of equal rank… sounds solid. Far more careful Marcher than flamboyant Dawnish, and likely to work.

It probably won’t be your last event, but being frugal for the first go is very sensible.

I was asking re the armour because of the rules on these things: full torso coverage + another location = a full set, and for heavy that triples your starting hit-points. Without a bit more torso coverage, you might not quite make the standard, which would be a shame as you’re so close (although the armour pieces physically protect you against some of the nastier damage calls). There are various possibilities… still, not an issue.

I would advise asking about, on here or the Facebook page for Dawn, and see if there’s a House you might like to tag on to for the event. Maybe to ask them for a Test of Mettle, maybe just to hang around with them: somewhere with a tent where you can put your things down, sit down for a drink, use a point of reference and the like, is very useful. It also gives you a group of people to socialise with, to whatever degree you like. Plenty of time to think on that.

Great info once again, Thankyou.
I actually need to get in touch with the Dawn organisers about my tent.
I have a bell tent, but it’s the emperor class. It’s 6 metres by 4 metres. If I end up on my own I may see if anyone in the ooc area would like to join me.
I’m gonna go shopping tomorrow for some extra bits and take on board all this great advice.
Will fabric glue work for adding a little trim? I’m really not so great with a needle and thread, although I’m not completely inept. We have a Boyes here and they have a great fabrics and hobby section I should probably be making use of.

Will fabric glue work for adding a little trim? I’m really not so great with a needle and thread, although I’m not completely inept.

Also, no one is going to take a magnifying glass and inspect your kit, so if it looks ok from 2m, don’t fret over it.