I put up a post recently where I was embroidering my tunic for my kit, the cloak I ordered for that costume arrived today and I wanted some advice on further customizations I was planning (also didn’t know if Jacquard ribbon is the name of thing im intending to use, I found the term online looking for similar products).

Here is the costume in full so far: 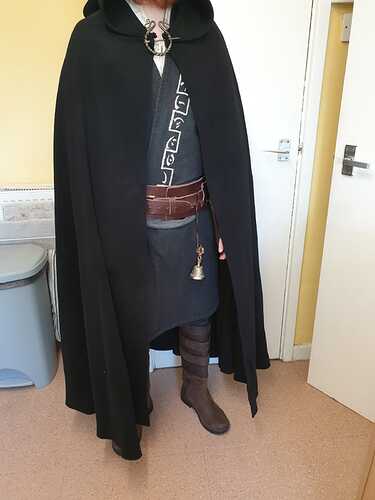 I wanted to add a decorative trim, so I was thinking maybe something like this: Greek Lookalike Braids – Herts Specialist Fabrics around the sleeves of the tunic to include more of the magic element.

I was also thinking of either or additionally adding a trim like this: Selection of Tudor Braids – Herts Specialist Fabrics to the edge of the cloak itself. I should mention its meant to be Highguard so was going for a religious kind of feel with the cloak trim.

Let me know what you think of these ideas (mainly worried it’ll be too much and detract from the kit as a whole), if you think two would be too many or any other advice or suggestions about my set.

I would suggest the Greek lookalike ribbons (endless labyrinth is a fine Highguard motif) over the Tudor flower and feather patterns (a bit too Dawnish or Navarr, perhaps).

Nice boots (did you convert them or are they bought?) including your embroidery. You’ve influenced me to give it a try too for our banner.

Jacquard means the pattern is woven into the ribbon or fabric, instead of embroidered or printed on top. That is a good term to look for as they tend to be a bit more hardwearing and they’re appropriate for the look. Go for repeating architectural style patterns in metallics on black instead of flowery things and you should be good.

Buy more than you think you need, once you start sewing you’ll probably need a touch more anyway, and spare can be used on other projects but having too little is a right pain!

Ok, first off that’s awesome!! (never expected to get that kind of reaction haha).
Second, so the boots I bought are these ones, I got mine cheaper but cant remember for the life of me where, they are very good though, good support and decent waterproofing.

So the way I was thinking about it was the Greek ribbons would be more closely associated with the magical aspect and the Tudor flower being a bit more religious, but maybe its a bit more regal?

I was worried it would be a bit more dawn in nature but wasn’t too sure, but I’ll likely steer clear of it if it is straying too far from Highguard. Thinking about it though the labyrinth is a religious symbol I think?

Essentially what I’m trying to do is impart my backstory into my clothing. So I’m going for a magister, so the runes are meant to invoke that, but my character is meant to be very religious, so that’s where the labyrinth comes in. However, I know that runes aren’t seen as favourable in Highguard, so to represent the dichotomy I was trying to have the more outward appearance (i.e. the cloak) be a bit more religious in nature.

Do you think going with the greek ribbon would be the best way to show that?

If you specifically want general religious in Highguard then the Labyrinth is the way to go. Greek key stands in for that quite well.

Otherwise if you’re following a particular Virtue then there are symbols recognised for each such as a tower for Vigilance or a chain for Loyalty.

We’re really not flower people at all!

Yeah that’s what I was thinking, also with the Tudor flower, only just realised its a flower, I saw the cross like symbol and thought religious, almost like an optical illusion where there’s 2 different images and you can only see one haha.

Thank you for the help though, will get some ordered and get to sewing.

Greek key is perfect for Highguard, most folks arent too bothered by runes either, well anymore than they would b e by any obvious wizard type

Those boots look amazing! Think I may have to pick up a pair for myself

Final update:
Finally finished both the cuffs on my tunic and the trim of my cloak.
I am rather pleased with the results, thanks for the help everyone! 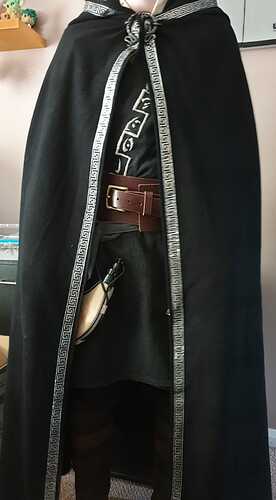 Yup, looks like Highguard to me! Do you have a hood to put up for the Serious Business?

Yeah, it does, the ribbon follows the around the hood as well (didnt post my head because of anxiety)