So I’m making an archer’s plate armour which covers my abdomen to my sternum. It is a steal plate sheet, but I’ve layered it in leather with a brass crest. Alongside this I’m making leather bracers with metal scales. Would these two armour pieces be enough to gain the benefits of heavy armour? How many hit points?

Disclaimer: not a ref.

Here’s the page on armour:
https://www.profounddecisions.co.uk/empire-wiki/Weapons_%26_armour

IF your breast plate has a back plate as well for full torso coverage, and is obviously mostly metal. If you have a big pair of bracers with iron/steel/brass/bronze scales (ie, not aluminium). If you then add to that metal greaves (another half a location), and for preference add a big pair of pauldrons (metal, covering shoulders and upper arm) or helm (metal, another whole location) THEN I’d say that’s a suit of heavy armour.

And that would get you +4 global hits, and any IMPALE or CLEAVE blow that hit the actual armour would be counted as a single hit.

If you can’t get to that standard (and if you’re wanting to play a nimble and fast moving archer, I’d be surprised if you did), it’s still worth keeping those armour pieces and picking up a few bits of Medium armour (thick leather, aluminium scale) to make a suit of medium armour (+3 global hits), becasue medium will block CLEAVE, and any enemy archers trying to shoot you will go for center of mass (of, torso, heavy, blocks IMPALE), while any melee attackers will likely try a CLEAVE at your arms (oh, metal bracers, blocks CLEAVE as well).

So far I’m looking at a pair of bracers and a front archers plate. What would be the minimum amount I’d need to qualify for heavily armoured?

So you’d need a metal back-plate, and either metal greaves (1/2 loc to go with the 1/2 loc of the bracers).

Given that you don’t take IMPALE to the head, usually (as a safety measure I believe), few people go for the helm.

You need torso and one other location. Valid locations are head, arms, legs, or half arms and legs. I think I’ve seen it asked before whether having just the front of your armour counts for coverage, and the answer was yes (although I cannot find where that discussion was).

So at the moment, you’ve got torso (assuming just your front counts, which I think it does though I’m not a ref) and half arms. In order to get enough coverage to get extra hits you’d need to at least add half legs (so a pair of greaves or perhaps tassets) or something on your upper arms.

So this is my plate so far. I’m making bracers with metal plates over them. So they are both “heavy armour” but I still need to cover one more part of my body?

Only having bracers on your lower arms is not enough to count as an entire location, so yes you’d need to add more heavy armour pieces. Adding some upper arm armour would suffice, or instead do your lower or upper legs. I’m also not entirely confident that your big plate would qualify as covering the majority of your torso, unless I’m misjudging it’s size it looks like it would leave a lot of your chest exposed. For a definitive answer on whether that piece counts for your torso then I’d suggest emailing rules@profounddecisions.co.uk

Well, it goes from just above my hips to my sternum.

I drew this up a little while back to help give a very basic armour ‘points’ explanation to someone. Basically, Torso (with the vast majority of it covered - a hero belt on its own doesn’t count, for example) is mandatory, and then you need to cover enough things to add up to 1. 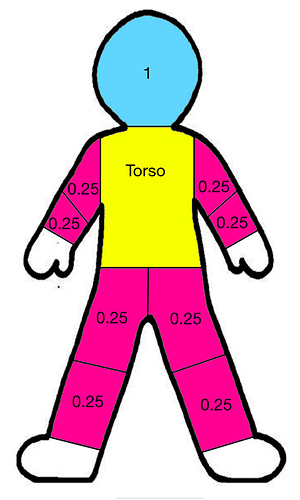 Shout out to you and this incredibly useful diagram!

So green is the armour I’ve got. And purple is armour I plan to make. But that still won’t be enough because my plate probably isn’t enough to cover the “majority” of my torso.

Gorget would help though and they’re fairly easy to find and won’t cause problems with archery. (pauldrons are a problem from experience!)

I don’t plan to do an archery. It’s just that I end up running around a lot as a chirurgeon

Ah, we were confused by…

In which case, I can definately reccomend full metal breast/back plate. “Shoot the healers” is a common trick for the monster crew…

What about if I can’t make full plate? I’m a bit short on cash and time. By looking at what I’ve already got, what could I add? I’m thinking I’m going to have to add some sort of chest/shoulder armour.

If it is make from steel or a heavy material it’s heavy, if it’s make from aluminium is medium,

I know I’ve seen this discussion on the forum before but can’t find it at the moe.

Medium Armour
Thick leather or any lightweight armour materials, such as polyurethane or aluminium.
Provides 3 extra hits and protects against CLEAVE.
Thick leather armour (the majority of the armour is more than 3mm thick) or any armour made from a light weight material such as polyurethane (e.g. Norton Armour), aluminium, or mixed neoprene and steel provides the wearer with 3 extra hits. Light mail, such as modern ring mesh (butcher’s mail) or mail with an open weave (sometimes called “ring mail”), counts as medium armour.

Heavy Armour
Armour made from steel or a similar weight metal
If there are plates used they must be at least 1mm thick
Butchers mail and ring mail are not included as heavy armour, regardless of the materials used
Provides 4 extra hits and protects against CLEAVE, and IMPALE
Any armour that is primarily made from steel provides the wearer with 4 extra hits. Other base metals that weigh the same such as brass would also count, but aluminium and titanium armour count as medium.

As others have suggested I’d go with getting a gorget of some kind that has some linked spaulders on them. If you’re on a budget have a look at UK LARP KIT on FB and ask if anyone has any for sale at the moment.

Mythlon also do some reasonable Gorgets and Spaulders that might be in your price range.

Remember you don’t need to have everything perfect first time, see how what you’ve got works for you on the field in your first game and then work from there. Also as long as you’ve got enough armour to count then the rest can be filled in with being vigilant and having battlefield awareness plus making sure you’ve got buddies to watch your back as a healer.

Thanks everyone for the great advice. I’ll see you all in April