I’ve got a couple of questions about place names in the world of Empire for a map I’m making.

Does the continent that the Empire is located on have a name?

Does the Jotun territory have a name? The Thule live in Otkodov, the Druj swarm out from The Mallum, the Grendel rule the Broken Shore. What are the Jotun lands called?

The continent of the Empire and neighbours is, as far as I know, un-named… I made it approximately X shaped, with lands to the SW (beyond the Iron Confederacy) and SE (beyond the Grendel and Axos).

I don’t think the Jotun lands have a name… their southern area (west of Mournwold) is called Hordaland, but I don’t know about their northern territories (west of Semersuaq).

The Empire is known, apparently, to some foriegn powers as the Cassinean Empire. After the Highguard province of Cassinea, where it started and has it’s capital (Don’t let Highguard know, they’re smug enough).

If you work up to a world map (I made a few, a while back), note that foreign powers are only noted if we have trade/diplomatic interests with them. To repeat a story from a past (piratical) character:

“Oh yeah, Phum. We run into their sailors here and there. It’s over to the south-west, I think. We don’t have anything they want, they don’t want to sell us much. Nice guys, filthy jokes, can’t hold their beer. And then there’s D’Avenant. Don’t try to land there, they will shoot you. I think I heard of a Freeborn ship that ran aground there a few years back. The locals provided repairs and resupply, and pushed the ship off their land. They don’t want to know.”

(of course, he could have been lying)

Does the continent that the Empire is located on have a name?

Nothing that’s been published by PD as far as I’m aware. We don’t even know it’s full size or shape - a lot is deliberately vague, partly to keep the focus on the Empire.

Does the Jotun territory have a name? The Thule live in Otkodov, the Druj swarm out from The Mallum, the Grendel rule the Broken Shore. What are the Jotun lands called?

@Geoffrey_Willoughby thank you for the info. What was your role in designing the map and the world?

I would love to see your world maps, please!

Are you an IC cartographer? Which nation are you part of?

@Emmanovi Thank you, I’ve put these names on the areas north and south of the Gullet.

I think I’m just going to put a big label saying “Jotunlands” across the whole combined area and call it done.

I play in Dawn (and have since game started), and while I am not an IC cartographer, I am perhaps a troubadour. I collect stories, songs, and bits of lore, so I suppose making my own maps is appropriate.

Oh, I did no design work for the game, I just like drawing maps of places. Usually OOC

I looked carefully through the “Foriegn nations” part, and attempted to arrange them on a map in the right positions, with rather vague outlines of the coasts ans suchlike. It was mostly an aide memoire for all the foriegn nation names and ports…

(I do maps off-line, so no digital copies. I sold copies of that here and there, and the last one was donated with that characters effects on death)

However, when looking to see if I still had a copy, I found this one:

made a year or two back, from vague reports, guesswork and geekery… ENTIRELY FANFIC AND UNOFFICIAL:

…a map of the Druj lands, the Mallum

(geek point if you can find the Tolkien reference) 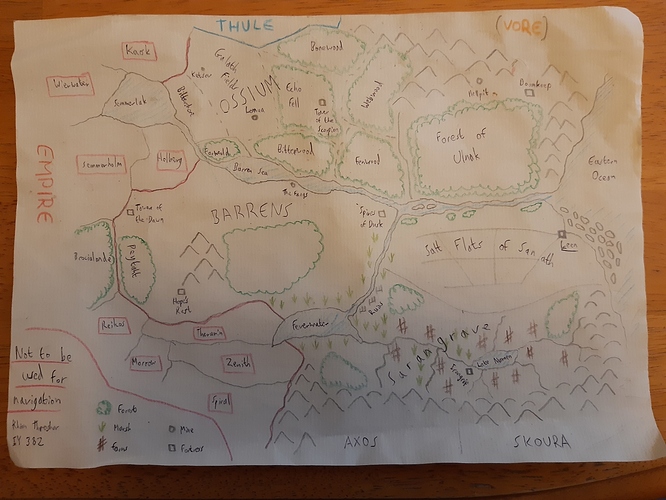 Very good, I love your work. I got a good chuckle out of the “not to be used for navigation” bits. What are your sources for the places in the Forest of Ulnak? I have not come across those before.

It was one of the Winds of War or similar a year or two back: the Great Forest Orcs were asked for what info they had on the Druj lands. As I recall, Ulnak came up as “particularly nasty forest, with a massive fortress in the north.” And the Druj lands are light on mines, so I gave them one there. Names were guesswork.