So I have spent a lot of time researching and failed to come up with answer to a question I have. I am looking at a bell tent as my pavilion is too big for Empire. However I was wondering what the etiquette is regarding metal poles and sliders? Should they be made of wood? Or do people over look this?

While a huge amount of discussion about bell tents themselves has been made, no one has commented on metal poles, if they have please can you point me in the right direction.

Mine has metal poles, as I think a lot of others do on the field too. I also have modern metal pegs.

Put something over it? Decoration? To be honest i cant imagine it being a problem, if i came to a tent, i came to do something or talk to someone not stare at the structure of their tent, a metal pole isn’t immersion breaking like a metalica tshirt but this is a players opinion

Metal poles are fine, metal pegs are fine, metal sliders are fine. White or off-white nylon ropes are fine. As with kit, camps are aspirational. Avoid stuff that looks plastic, avoid neon colours, keep blatant logos out of sight as much as you can, but don’t fret about stuff you can’t realistically change. 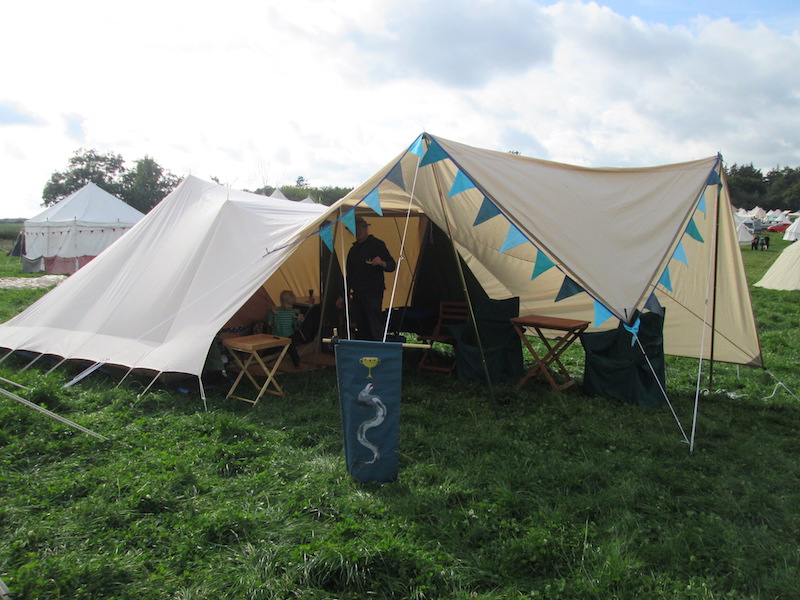 As an example, here’s our camp last summer, pre-time in. The tent is proper cotton canvas with steel poles. The awning is cotton/nylon, with nylon guys and aluminium poles. Some of the chairs are wood, some are your standard fold-up nylon and plastic jobs with covers over them. There are fairy lights wound around the porch poles. There’s a bright blue plastic tarp underneath the tent itself that’s only just covered at the doorway by a straw mat. There’s an airbed and a modern travel cot and a whole camp cupboard of OOC food and such just inside the tent. But from right outside it all passes; there’s nothing that grabs at the eye with its modernity or plasticness.

Thanks all! Much appreciated and I shall stick with metal poles rather than spending extra money on wood ones. @TheSwordGuy it’s a nice idea but as I’m intending to use a chandelier I’m not sure it would be the best idea.