Hello all,
I’ve just acquired some second hand leather chest armour for a very reasonable price on the interweb. It’s nothing very fancy, however it’s a little bit big for me and quite ‘flat’ horizontally, though the layers don’t all sit particularly flush when worn. Hopefully I’ve successfully uploaded the picture below… 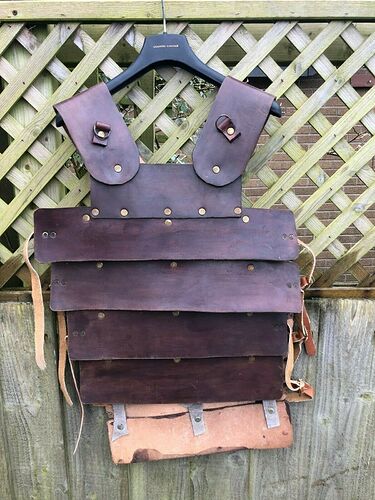 I was wondering if any of the wonderfully handy people in the community might have a bit of advice for me as to possibly altering the fit and moulding the plates? I don’t mind not being 100% precious with it and I’m intrigued by the hobby of leathercraft any way so I don’t mind taking things apart of modifying things in slightly more extreme ways…
Also, I’d quite like to make it more visually interesting so any tips/techniques to help with that would be much appreciated!

Sorry if I’m asking a daft question, I just figured that I’m new to the hobby and this would be a good place to ask! Thanks!

The photo has uploaded fine, so things are off to a good start. I’m still just starting out with leatherwork myself, so I’ll only be of limited use but I hope you won’t mind me asking a few questions that will hopefully help when the more knowledgeable bods arrive.

When you say a bit big, is that with regard to the shoulders, the body plates, both? Is it too long, too baggy, both again? What’s the thickness of leather that wants modifying, as that may affect what tools get recommended.

Also, have you tried it on over multiple layers of costume/clothing? At most events I find myself wearing 3 layers minimum and they can pad a body out more than you might expect. I ended up having to buy belts that would fall off me with “normal” clothing. You may also want a deliberately thick layer between you and the armour for comfort, it can all add up fast and mean more minor changes are needed than you might first think.

Do you have a nation in mind for your character? Some of the cultural dress styles can be bulkier than others, so may affect how much alteration you want to be making. The choice will also influence the sorts of suggestions you will get for visual changes too - decorating with (in-game) runes, animal motifs, patterns and colours can each push your appearance towards certain nations of the Empire and you’ll get more focussed advice if we know what you’re aiming toward.

Hi! Any advice is welcome, new or otherwise; I imagine I’m more green than you!
The shoulders are rather big, but the plates themselves are fine. Because the shoulders are rather large, it hangs a bit low but the length of the body itself seems alright, if that makes sense? The plates are 4mm thick.
I’ve put it on with a couple of thick jumpers as I haven’t assembled much soft kit as of yet. I’m considering making a gambeson or some similar, thick layer like you suggest as I’m planning on brass coast and I imagine my day-to-day kit, while layered, won’t be super padded. I don’t think it suits the BC theme super-duper well, but if Empire is something I enjoy, I’d quite like to invest some time into making some nice leather scale etc. But who knows!

As I said, I might be asking really nit-picking questions or just be horrendously misinformed so fire-away with any suggestions/questions! I noticed that there weren’t many questions as to the customisation of leather kit, so I thought it might be a good idea to ask some possibly simple/dumb questions, especially for beginners (like myself!) who are buying second hand or that don’t have a lot of experience working with leather!

All your questions are valid as far as I’m concerned, so no need for worry there.

The most straightforward fix for over-long shoulders in my opinion would be to detach the rivet at the back where it connects with the rest, and make a new hole higher up the shoulder plate that will be right for you. If you have access to a drill then hollowing out the existing rivet will be the easiest way to remove it. For 4mm leather, you’ll likely need the sort of leather punch that you strike with a hammer (and something to act as an anvil) to put a new hole in, rather than one of the squeeze-handle punches.

It wouldn’t be the prettiest of solutions but having a robe over top, belted open to show the armour, would hide the spare holes at the back and keep you looking BC.

The longer way would be to remove the shoulders entirely and then put in new rivets front and back. That would keep the attachment rings on top in a better position and while I can’t see any shaping to those shoulders, if there is some then this method would also retain that where my first suggestion would spoil any contouring.

In either method you have the option of cutting away the excess leather with the original hole to neaten things up. Cutting around the old rivets is an alternative to drilling them out too, but you will then need to either cut them out of the body plate too or leave them in place and put new holes into the horizontals as well.

As to making it visually interesting, acrylic paints work well on leather so you could paint appropriate stuff on; maybe waves, ships (I’m stereotyping here out of ignorance) or similar. The other advantage is that paint can be removed should you want to take it back to generic armour, whether for a new character, as monstering kit or for trading it on at a later date.

Another option would be to tool a scale pattern into the leather plates. Not the same as actual leather scales but it would be tooling practice for you to see if you enjoy that side of leatherwork. And half-hidden under a robe it might still look quite effective.

For the problem of the plates not sitting flush, the only thing I can think of is wearing it into a hot shower and then keeping it on while it dries. But with leather this thick I genuinely have no idea if it would even work, it likely won’t make much of a difference if any and depending on the quality of the rivets, you may wind up with rust staying the inner side and anything you had on beneath to keep you warm/comfortable during the drying process.
Honestly I imagine you’d probably need to dismantle the whole thing and replace those strips holding the horizontals together with ones in a sort of s-bend in order to put some curvature in while using the existing rivet holes, possibly shape the plates with a knife too. Just a really big job, a lot of effort before you’ve tried the hobby out, and time that would probably be better invested in building new gear from scratch.

Hope some of this helps. And do come back with any other questions of course.

Looking at the inside (where the dye hasn’t been brushed on), that does seem to be vegetable-tanned leather, so it will be possible to mould it to a new shape with (hot) water. Not easy though, and if you do use heat then the process may not be reversible.

For making holes, a drill works fairly well as an alternative to a punch. Not quite as clean.