Hello!
I’m starting a new character who will be a night mage in a small coven (of two so far) in Navarr.
I want to plan some ‘set pieces’ for performing rituals so I’m a bit more confident in them. I think the Navarr hearth magic and the Night magic affinity with food and drink work together well. But I’m struggling to think of how to use it and it look / feel cool for anyone else observing them or being the target of them.
In a perfect world I’d love to do some light effects or something so they look impressive at night time in the Regio or in our tent.
Regardless of the nation, has anyone got an experience/ ideas on cool stuff to do during a Night magic ritual?
Any cool photo links are also appreciated. X

The Navarr hearth magic around sharing a meal is pretty new, so new that no one could have done it at an event before. It does seem a really interesting approach, but it’s quite different to how a lot of rituals are performed. That said I don’t think it would be that difficult to make that approach special

One thought about a rough structure:

You might want to think about where you draw the symbolism from for your rituals: many of the mages in the Empire use one of the magical traditions for symbols and there are a number of ways you could use them
You could serve the food on a plate with a relevant rune/constellation/animal on it and then mention it when sharing the food.
You could have a story incorporating that animal/exemplar/eternal or personas (These might take a little tweaking to make them less League based if you want the story to be a Navarr one.)

Alternatively you could make up symbolism for the food that you are offering or just tell a story that obviously ties into what the ritual does (a party for chamber of delights or a story about letting go of the past for cast of the chains of memory.)

In terms of lighting effects there are a few crafters who sell crystal phys-reps that light up in different colours and a number of those used to light up a tent, would be a really effective way of making it a ritual space.

Hello and welcome to the best nation!
(Other values/definitions of “best” are available.)

You could perhaps bring in the tradition of patterns by tracing a design onto each participant in water or alcohol (I’m thinking the non-drinking kind that’ll evaporate fast, but representing a strong intoxicant in-game) so as to cover drink in another way. Moving around the ritual space in a repeated pattern, with each person adding an item of food or drink to a table on every circuit and then taking from the table to invoke the shared meal, would combine all three. It has the added advantage that while hygiene is of increased concern, players could take from the same items they placed earlier so as to avoid/minimise contagion risks.

Were I a ritualist, I’d love to have some tall stakes capped with lightstones (colour fade perhaps, for Night’s deceptive qualities) and use them to mark out a route for everyone involved to slalom around, possibly with groups going clockwise and counter so they have to weave between each other too. Placing them out to copy ritual-relevant constellations maybe, since navigation by stars would probably be a skill most travelling Navarr learn even if full astronomancy isn’t how you want to go with your rituals. No good for an indoor space though, unless you’re able to also transport some feet for them to sit in.

Okay okay so one of the reasons I love the new Navarr hearth magic of sharing a meal is because of how well I think it works with Night, and what I was doing already.

So basically I like to run Night rituals like a multi-course meal. What I try to do is get everyone experiencing and feeling the same sensations and emotions. Music, shared food, burning incense etc.

So usually what I’ll do is start with a short story about what we are trying to do and to achieve.
Goals: aligned
Probably pass around food while this is happening.
Taste: aligned
Then move on to talk about Sacrifice for bit, and get everyone to cut themselves and bleed into a bowl.
Physical sensations ( pain): aligned
Then talk a little about whats going to happen and why its important while music is plays.
Emotions (hopefully): aligned
Then mix other stuff into the bowl and pass it around for everyone to drink from.
Taste: changed, and still aligned.

Obviously miming eating drinking if needed, and being real clear about what the food / drink is if people do want some. I frequently talk about having a very potently flavoured / smelling drink when its actually water.
Also aside to get people to pour it out into their own cup, dont share drinking vessels in the field.

I can’t think of them now, but u can get some ground minerals that burn a different colour in a fire, if u wanted that lighting effect?
I think copper might burn green?
Probably cheaper options available tho 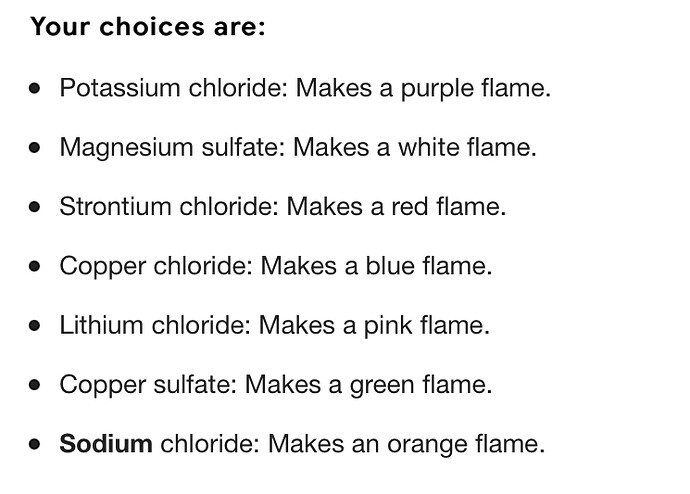