I have a gorget and a breastplate from different models, gorget is ‘Markward’ whereas the breastplate is ‘Lucas’. When I run or in general move they clang together quite annoyingly, how would you recommend stopping them from doing that

Could you give us a picture of how they look with both of them on?

First, experiment with different ways of layering them. Can you put the gorget under the cuirass, for example?

If that doesn’t work, glue a thin layer of leather onto the back of whatever piece is on the outside, which should do a fair bit to deaden the sound.

If that’s still not enough, drill or punch holes through all the layers and use a piece of leather lace to point them together firmly. 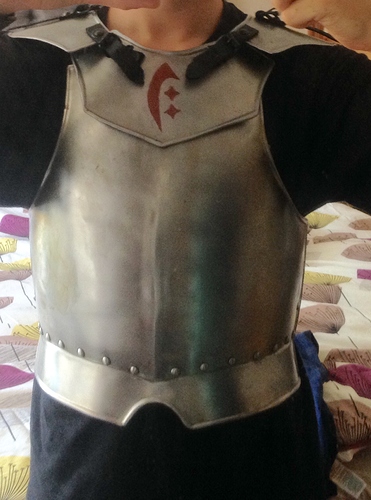 Awesome, heavy armored healers are always good. Have you tried putting material of some kind between gorget and cuirass? Type of material probably depends on nation, but even just running a scarf under might help.

I can’t agree more the extra hit points for healera are vital unless you fancy being squashed - the extra 4 hit points are fantastic. I am already running a scarve round my neck to stop it rubbing against my collarbone but I might try and line it with something padded, who knows

looks like it needs backing. Some velvet would be thick enough,

how would you attach the velvet to the armour?

I would just glue it using contact adhesive.
Felt could also work and would be cheaper easier to get in different colours. Probably would last longer too now I think of it…

The front plate of the gorget is redundant.
Take it off, and re-rig the strapping so that the shoulder plates attach to the breastplate.

Here they’re just sitting on top of each other, how would you recommend attaching them, I have zero metal working skills. 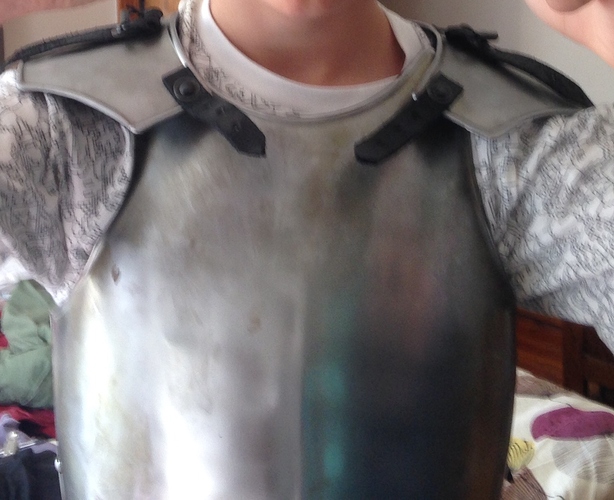 picture of just you in the breastplate?
Might be helpful to see the strapping there.
No Skills eh?
Do you own a drill?

Here is a picture of the reverse of te Breastplate, there are straps on the top that 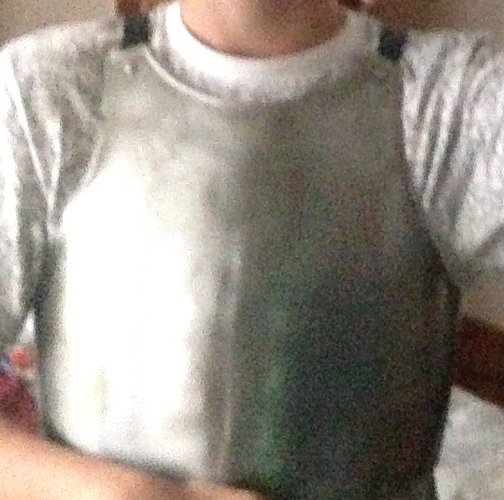 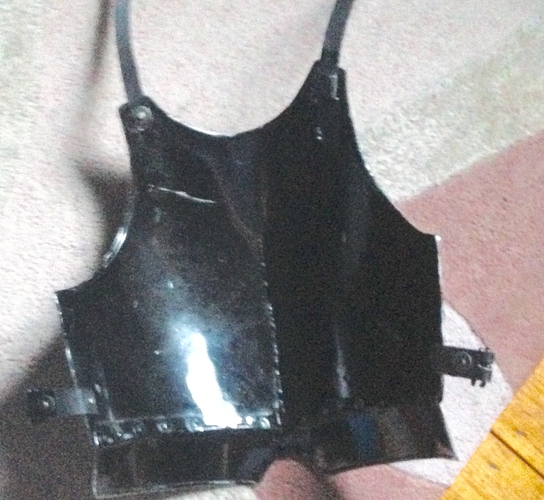 Looks like you need to attach two new buckles on the breastplate.
http://www.leprevo.co.uk will sell you pre cut straps, buckles and two part rivets.

Make up your buckles first, (i.e. attach a buckle to a strap. it’s pretty straight forward, just look at the ones on your existing kit.) then buckle them onto the pauldron straps and mark where they need to attach to the breastplate.

Use an HSS drill bit, use a slow speed, and a plenty of pressure. also, add a wee dab of any oil to the tip of the drill bit. Lubrication helps cool the bit, and ease it through the metal as it cuts.
Wear safety goggles!

And remember, if you bleed on it, it becomes Art.

Good god, this is only going to go badly - thanks for your advice. Before I embark on this adventure are there any shops that could do it for me or am I out on my own. Just wondering before I make the leap.

Besides, all the historic examples i’ve seen of munition breastplates like that are full of extra holes and armourers mistakes.

Could I use a strong adhesive instead of drilling a hole to glue the buckle to the Breastplate?

buckles and straps are all on leprevo. you need to measure whats already on the gorget/pauldrons and see what type you need.
and I wouldn’t use glue, riveting is the answer.