As people are starting to plan small player events over the coming months I’m opening up this new thread for them.

Please post the event name , date , location and a brief summary of what it’s all about plus a link to your website or FB page.

I can also recommend posting your event on Empire LRP: Event Ads and www.larpevents.co.uk 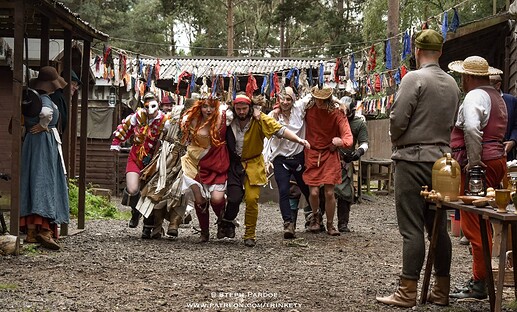 Photo from the Good Leaf Games 383YE by Steph Pardoe

On the trods through Therunin you rest up at a wayhouse rest stop for a day before continuing your journey, you soon realise many other citizens have had the same idea.

An Empire LARP social and combat player event, set in 200 acres of woodland in the Cotswolds. The event will be a mix of social interactions and skirmish combat set in a way house grounds in Therunin.

This is event is fully self-catered.

Combat and non-combat players as well as all nations are welcome - all walks of life travel the trods after all!

This event is open to all nations

Over one hundred Captains answered the call to protect Hercynia. Military units from across the Empire fought and bled to keep the Vallorn from over-running the territory. It is a close victory.

As the fighting subsides many aid stations are set up to tend to the wounded and crippled returning from the numerous battles fought against the Vallorn and its ruinous allies.

One such aid station is on the edges of Bont Goch, the oldest and smallest Steading in Deers Folly. Heroes from across the Empire stand ready to defend the aid station and some have even come seeking to release those souls captured by the Vallorn in the recent battles.

The Heirs are in disarray – pursued by agents of The Silent Bell. Travellers should be wary because the Heirs and their allies will surely seek revenge against the Empire.

Navarri-hosted event but all nations are welcome!

Tickets are £45 for the event (Friday - Sunday) with an additional charge of £10 for those who wish to arrive on the Thursday.

This will be a HIGH-COMBAT event with the potential for combat to happen inside the camp. Non-combat characters are welcome and all monsters will be briefed to only attack characters who engage with them.

Campsite is located on the outskirts of Birmingham with good links to Birmingham Airport and a train station (Hampton in Arden) less than a 10 minute walk away.

The newly formed Chapter of The Navigators of Virtue would like to welcome all upstanding citizens of the Empire to attend an evening to relax, socialise and to discuss the nature of the Empire’s History and its possible Future

A five hour social evening with canapes, drinks, sermons and history held at the Roman Baths and the Pump Room in Bath.

Welcome to a little field out in Mitwold of the Marches hosted by Gilly Honeygrove. Come along to relax with people from all corners of the Empire at this little gathering while things settle down in Anvil. There will be songs, fire, small competitions, and friends galore!

This is an interest form to get accurate prices which are based on number of tents, we hope to get prices out by next week. We are aiming at a max of 50 persons. 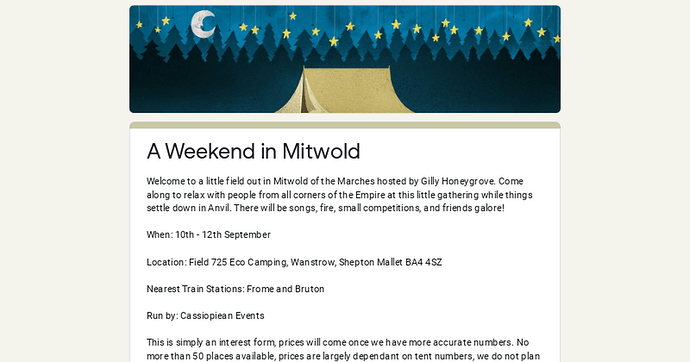 Welcome to a little field out in Mitwold of the Marches hosted by Gilly Honeygrove. Come along to relax with people from all corners of the Empire at this little gathering while things settle down in Anvil. There will be songs, fire, small...

Hi all, hosting another empire player event, on the second weekend of september (what would have been e4 ), in Boston, lincs. Weekend long camping social with a tavern hall and a LOT of archery games and exercises as the main activity focus, plus other activities like a bring and buy, foot the ball, other games and contests and fight practice. Set in upwold, in the marches, but characters from any player nations welcome! expecting around 40 - 60 players. low-no threat, mostly social with combat practice activities.

Also on the lookout for those who have musical talents (particularly medieval english flavour) they would like to present in the tavern, for free tickets, drink and food, and any caterers that are interested.

The Steward and People of King’s Stoke once more invite friends to join them. A planned event for Marchers and friends.

(Due to cancellation of main events, this event will be taking place during the same in-character season as the previous Wassail event - an in-character explanation will be provided!)

The event is fully catered by Serve It Forth.

A one day Seminary with optional overnight stay in single rooms at Northern College, Barnsley: https://www.northern.ac.uk/conference/

Doors will open from 11am, with the formal event run from 12 noon. There will be four seminar slots over the afternoon, coffee and cake, and dinner provided. Formal classes will be over by around 6/7pm, and the evening will be soft social and discussion, with people welcome to leave when it suits them, or book a room and stay over.

The price will be around £60 for the day, plus an optional £32 for bed and breakfast in a single dorm room. Donation and hardship tickets will be available with no questions asked.

In order for the event to be financially feasible, we’ll need a minimum of 40 people. The venue can support up to 80 people.

Cost: TBC
(Tickets may be available for individual evenings, this will be clarified asap)

Event page: The Mark of the Liberator - An Empire LRP Party | Facebook

The Church of The Little Mother, In partnership with the University of Holberg, is celebrating the acceptance of a large number of orphans from the church being taken on by the university under a scholarship. You are cordially invited to celebrate with us. There will be a feast, frolics, fun and perhaps a fortuitous encounter or two.

Your Ticket includes food and an IC bar in a real-life castle!

I will open bookings tonight at 9pm, currently here to make sure there is interest.

For covid reasons, numbers will be kept low, roughly 40. As it will be October there will likely be a requirement for “covid passports”.

An excuse to get your glad rags on and come celebrate! No weapons are required.

And just a small note to say that bookings are now open for King’s Stoke Wassail.

Hello,
I’m running a player event in Liverpool on 26th February 5pm -11pm, food and drink provided.
This is an evening of entertainment in a Sarvos playhouse. Performers from the Empire are invited to give a short performance, be it song, dance, poetry, storytelling or a play. Guests will enjoy a 3 course meal from conspiracy catering.
Tickets are £45 with a £5 discount for anyone offering a performance between 5 and 15 minutes.
It is open to all Nations. Tickets will go on sale next week.

Hello! Matiaz i Emberbright i Riqueza and the rest of the Emberbright family welcomes you to come trade and socialize prior to the first anvil summit of the year!

This will be held at scarisbrick guide campsite which is 45 mins out of liverpool central or 8 mins from the nearest mersey rail stop. It will be a social event with some light plot but not combat heavy.
This is a trade centric event and although everyone is welcome the waitlist will be prioritized by those ic invited by a member of the Emberbright, traders and freeborn in that order. Weekend tickets are £25 and saturday only are £5
Event link: https://fb.me/e/2NxHx4aqE

New event from Eerielight Events, the team behind ‘Shadow of a Fallen Queen’:

Ossium is a land of dense, twisted forests and dripping marsh, rich not only in natural resources but also in threats. This wild new land offers opportunities for those with enough courage to grasp them. On the edges of the Webwood, in a camp of prospectors and merchants, something else stirs in the night. Patiently waiting to be discovered, whispering in the dark…

If you would like to join our Facebook group to stay up to date with everything, you can do so here - www.facebook.com/groups/eerielightevents