I am back with more questions. Slowly getting more excited for the event in April!

I have decided upon getting a two handed spear/Polearm. My two favourites are the Sentinel Spear and the Rune Spear. But I can find no information on whether they are thrust safe or not.

Any advice or recommendations regarding those two specific weapons, or Spears/Polearms buying/use/maintenance would be super helpful as its the most expensive part of my Empire Journey.

Where are they from? A link would help.

Generally with LARP weapons, if it doesn’t say thrust safe it isn’t.

You can usually tell if they are, The heads tend to be fatter and less defined by the softer foam. But If it does not specifically state it is stab safe or has a collapsible tip then don’t buy it.
The most weaselly worded answer I have heard was “If used properly it will be perfectly safe to use”.

Pop a link up and let us see, also Email the retailer and ask if its stab safe with a collapsible tip of at least Xins (Can a ref/weapon checker please weigh in please, @tea do you know?)

My apologies for the lack of link guys. Posted it quite late while doing late night LARP gear shopping. 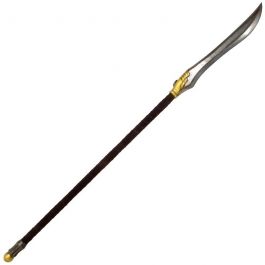 The elven sentinels are the inner city guardians of the elven realms, often seen patrolling in the elven cities they are greatly skilled in combat and are heavily armoured and ready to fight at all times, and while they don't see much combat they... 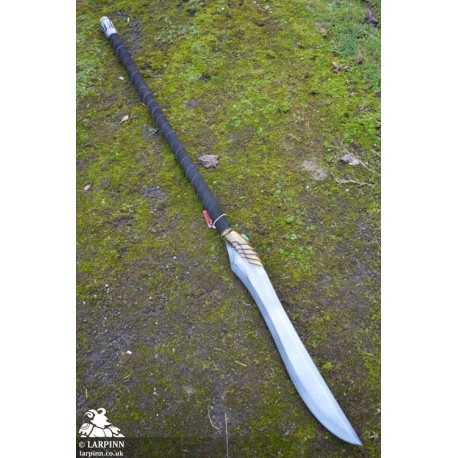 The Rune Spear - 74in - LARP is made from foam and latex around a fibreglass core to meet UK safety standards for LARP spears, polearms and staffs. 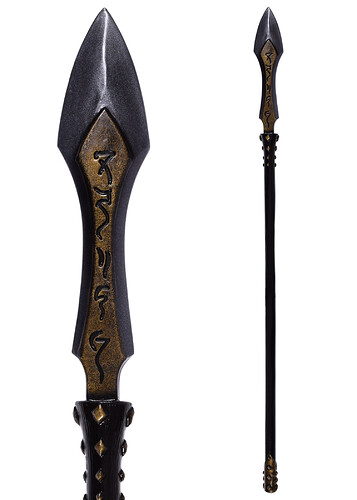 Rune Spear The Rune Spear by Epic Armoury is a LARP foam weapon made of composite materials in novel hybrid method. With its tip-widening blade…

Checking on the rules For Empire Spears MUST be stab safe, polearms don’t have to be.

Looking at the links given the Sentinel Spear specifically says it is not safe for stab attacks so that one won’t work for Empire. (It’s too long to be a great weapon too)

The Rune doesn’t say it is stab safe, and should be to be valid for Empire. Quick email to the shop should sort that out though.

The Sentinel is definitely not stab-safe. The construction is wrong.
The Rune is “probably” not stab safe. There isn’t a good zoomed image of the head so I can’t be definite but I don’t think its Stab safe either. The head doesn’t look like it would collapse.

A quick look at the website, none of their weapons are stab safe. The points/blades are too thin and if you tried it would tear the latex/foam.

Compare them to these: http://www.saxonviolence.com/collection/spears
notice the wider stabbing tip of the halberds.
I would recommend Saxon Violence kit, Its good, sturdy well weighted and has a historical aesthetic I like. Also the owner makes them all him self so it’s easier for small customisation if you were to ask.

Collapsible tip weapons at Empire require a specific combination of reinforcement and squishy padding. This is not very common in mass-produced weaponry.

Makers I can think of who tend to build weapons that pass (this list is not official or exhaustive):

Out of those, I personally find Saxon Violence are one of the best, in terms of quality, usability and durability.

In general, it’s a very risky proposition to buy larp weaponry online. All of the makers I’ve listed regularly trade at Empire. Most of them take custom orders and would be happy to produce whatever you can imagine for only a nominal extra fee.

As for spear/polearm rules, it comes down to how you would like to wield it:

As a result, you can use non stab safe spears are Empire, but only as a polearm and only to strike.

Recommend buying at event as two of my expensive swords failed from larp warriors, will only buy weapons in field now

Thanks for all the info and recommendations guys. As per you’ve outdone any other community ever.

My only reservation with buying at the event, is no time to practice weilding my weapon prior.

But I’ll have a look at those recommended merchants! Ta

One thing to be aware of: most UK larp weapon makers are relatively small businesses. Mail order can sometimes be very unreliable, which is another point in favour of buying at events. Out of that list, I would only personally try ordering in advance from Saxon Violence or Skian Mhor.

Check to see if any of the traders on that list is going to either of these two events if you can get to them and you’ll be able to pick something up before the first Empire event.