so I’m making kit for myself and I’m wanting to put some runes on things. The wiki talks about combining them in different ways and I was wondering two things.

Firstly, is there anywhere a dictionary of combined runes somewhere or a generally accepted definition of what x + y means?
Secondly, when combining them are they placed in an accepted pattern of some kind with greater and lesser elements? Or can they be merged in some way? I was looking at Orphis, verys, and tykonus all have overlapping elements and could form effectively a single symbol. Or is that heresy?

No rules as far as I know.

You may cause additional discussion or alarm - this is not a bad thing! There are rune nerds in character who would be delights (possibly at your expense) to discuss your ideas!

Profound Decisions left alot of these sort of design decisions up to the creativity of their players intentionally to produce a wide and varied range of decorative items in play, same reason only ideas for banner symbology are given no specific designs.

Or is that heresy?

The runes have very little connection to the Way, so I can’t imagine anyone will accuse you of Heresy for messing around with them. Unless you claim the runes can make you more virtuous, etc.

Most of the field will have no idea, some will go “oooh the empire runes!” but the remainder will love it as something to play off

From the perspective of a Magical Traditions Nerd

So there aren’t hard and fast rules for these types of system (outside of Dramaturgy - which might be an interesting idea to look at for inspiration.)

Another source to look at would be the rituals themselves, many rituals give multiple runes and this might give you some inspiration about how to use them. For instance Bravash + Irremais you have the abundance that comes from cutting away the weak. (It might not be the only way to combine the two you could play with the Goat aspect of Bravesh and be about the knowledge of driving off what has once caused you harm.)

“accepted pattern of some kind with greater and lesser elements”
As far as I am aware this doesn’t exist, but it’s a cool element to develop for your personal style. I do note often without other reasons rituals tend to start with the stronger rune magical symbol (unless they have another logic for progression of symbolism.)

On the overlaping them one difficulty might be how modular they are using your example of combining Orphis, Verys, and Tykonus could you distinguish that for switching Orphis to Diras, or Tykonus for Ull?

Here’s an example of runes used for combined meaning, on my bracers, beltplate, and pectoral:

“This blood you have shed in battle is transformed into the beginning of your mighty destiny!”

(Why yes, this character is a Dawnish healer-mage. If runes DON’T work like that, don’t tell him :P) 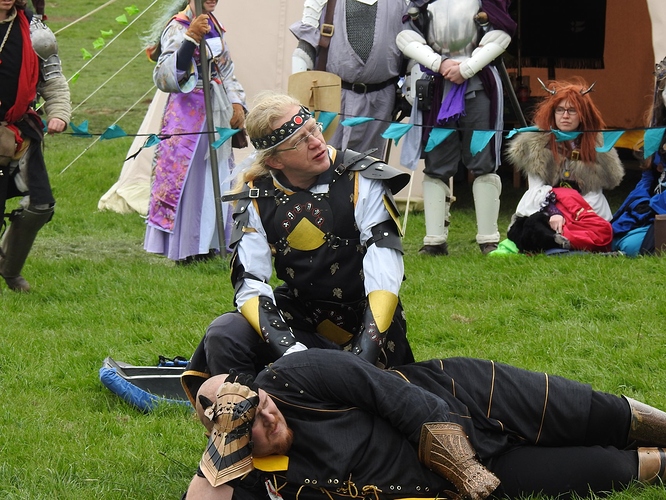 As previously mentioned, while I don’t think there’s anything against it magically, making what effectively amounts to a bindrune will get confused very quickly with similar runes that are oftentimes counterparts to each other.
I can’t see that it will do anything mechanically, however.

I like the idea of it being a way to represent a complex idea, bringing multiple elements together. And that armours really cool, is that simply painted on or are they carved in as well? I wonder if I was doing it whether I’d try to represent them as bracketed phrases of some kind (battle blood) being a single concept (transformation) standing alone in the middle and (beginning of mighty destiny) combining the last three. Which is just to say that the more I see of this the more I think I’ll enjoy talking about. Not planning on telling anyone something they’ve done or are enjoying is “wrong”, don’t think that leads to anyone enjoying themselves. But engaging different traditions and coming up with designs of them might make some game (if I’m using that right)

Painted on, freehand using minature acrylic paints, and then varnished over the top for durability.

And as they are so character specific, this does mean that they can all be peeled off leaving the armour plain black, should the need to do so arise…

What’s the coverage like and what brand? I’ve got a couple of leather paints coming but if I can just crack out the workshop ones I can have some fun with that

games workshop paints for the red and white, a couple of coats each time. The gold is purchased acrylic form an art shop, and needed 3 or 4 coats for the solid bright panels. One coat of matt varnish painted over the top.

Any acrylic paint will work on leather, and most fabrics. Many thin layers gives it better sticking power.

You don’t need expensive ones!