I’m practicing drawing runes in the hopes of making and selling some stuff (jewelry, trinkets, mage armour, ect) to sell for IC coin some day. Any runes you guys think are in high demand so I should make certain I can do well?

Side question, and rune pairs I should practice? (A set of two runes that, when next to another, take on a greater meaning beyond their individual parts)

I think most people wouldn’t understand what the runes, that you give them, say so you are probably going to have to explain what it means. I believe this would suggest that a particular one wouldn’t be in high demand. What I think you should do instead if go for ones that you can convey the virtues with, something to do with the realms or maybe something that represents desirable attributes such as strength.

I think as a sales man, with something like runes, your job is to add intrigue and mystery to it. Present it to people, almost like a virtue puzzle. It may state something but that person may need to work out what that truly means to them.

Other than that, I can’t give you much more help as I am one of those people who can’t read runes and so wouldn’t have a clue what meant what.

Blood (Rhyv) is used as the symbol for the hospital a fair bit, so that’s often in demand as a healers marking.

A set of Runes for a Realm magician (ie, for a Summer Ritualist) might be worth assembling…

Personally, I practiced and painted on my mage armour the following runes:
Blood Battle Transformation Beginning Glory Destiny.
Contextual meaning:
This blood you have lost in battle is transformed into the beginning of your glorious destiny.

As a Dawnish healer mage, that’s my runic set, but it’s very specific.

Your best bet is to pick anything you feel is a good match, and come up with a story of why those 2 should be together.

There is some stuff on the wiki about which runes are more appropriate for certain magics, and most rituals have a note on which rune’s may be used in their casting if that gives you a starting point.

It’s much more fun if you add to the game story with your own ideas.

All of the runes are made of the same basic set of 3 arcs and a 4-point star, so once you have those parts down you should be good. I practiced a fair bit by scrawling them in the dirt or on things for rituals, or even tracing them in the air. The trick is to get Naeve and Evrom the right way around for example.

I have an embroidered rune chart I keep in my belt ritual kit, but you could easily have a small notebook with one on each page, along with its associations. Or use fabric paint for a nice hard-wearing foldable chart. Possibly play a wizard or artificer who has a habit of doodling runes when they get nervous or bored. As an excuse to practise. And frighten very careful magicians who find a page covered in 24 variations on MAWRIG and start screaming.

inhales ok here I go.
With all honesty how do they look? 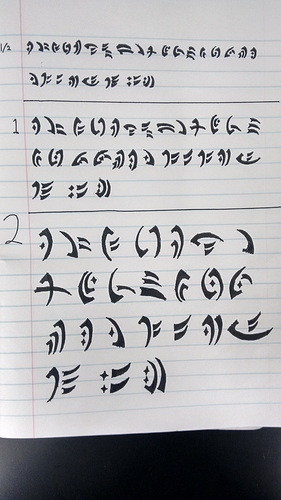 Any tips and suggestions for improvement/ what I’m doing right? I’m not an artist so there might be some basic things I am not aware of. I know a few of them still need work (especially

, it tricky getting the two

Remember, my goal is to make things to sell for IC coin with runes painted on them, so would you say they are of that quality?

Side note (and feel free to not answer this) would people prefer hand done runes that aren’t uniform or would stamps of the runes be better?

They look really good. If you are going for smoothness then you may need to work on the fourth one on the second line of two but I don’t know much about runes so I couldn’t say if it should look like that or not, just from an aesthetics view. I think you would definitely fined someone who would buy something with these on.