Plain one-handed or one-and-a-half handed sword for sale, used a handful of times and in very good condition. Total length: 108cm, blade length: 84cm. Original price was around GBP 60-70 so I’d like GBP 30 for it. Can either be picked up in Oxford or at E4 in two weeks. Here’s a photo: 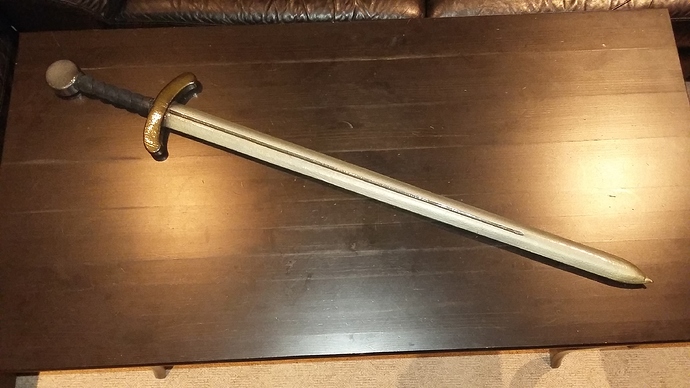 Who is the maker, out of interest?

I’m pretty sure it’s mass-produced, though. I was going for ‘basic and easy to find’, not ‘fancy and unique’ when I bought it…

Grip & pommel say Light Armouries to me, but I’m not entirely certain.

At 108cm that makes it over 42 inches. Are you selling it because Empire dont allow it?

I’ve never used it at Empire before, actually. Why wouldn’t they allow it? I’m not too familiar with the combat system there, so…

It is definitely not thrust safe, though, and not meant to be. It’s got a fibreglass core.

My mistake though as anyone with the Weapon Master skill can still use this, they should just be aware.

Oh. Thanks for the clarification, I wasn’t aware of that. Nearly a two-handed sword, then?

I just had a look at Light Armouries and it’s very similar to what they have. But I don’t think that’s where it came from.

Ive sent you a message about this.

It’s 42.5 inches. I wouldn’t expect anyone to kick up a fuss around using that one handed because unless you go larp weapon shopping with a tape measure you won’t spot that. Some ‘42 inch’ weapons will be a little bit shorter or longer because of variation. LRP weapon making isn’t a super-precision art.

Agreed, That’s neither here nor there. Its was probably made when there was overlap between one handed and two handed weapons.

Well, that was quick… Sold to a gentleman* that’ll pick it up at E4!