What are you packing for Empire IC?

Inspired by some great photos of IC kit people took after Projekt: Ragnarok so what are you packing IC for Empire?

This is some of what Asher has in his pouches and bags. 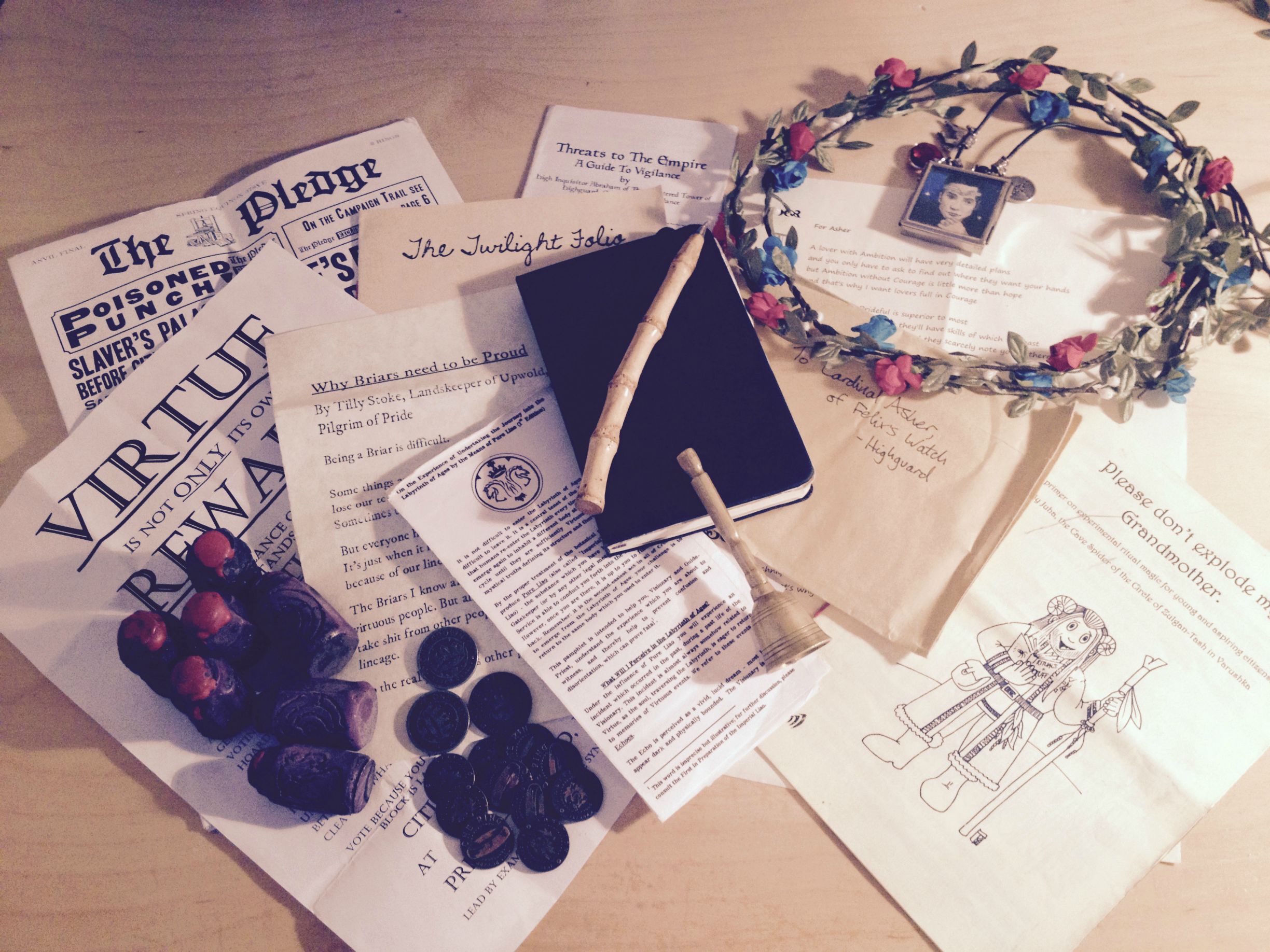 (I recommend hosting your pictures on Imgur.com if you don’t have somewhere else to host them already, then just grab the BBCode link from there and cut and paste).

A Wintermark Stienr doesn’t really need much in the way of kit.

I am thinking of making up some trophies for me to hang up outside my tent.

Lots of “in tent” stuff as we are ic camping… but what should a Dawnish Lord and his family be carrying?

Isca mostly carries a belt-full of things which were on my list as a Girl Guide. A roll of string on my belt, because several times an event someone will need string, then look surprised when I offer it, then I can be confused because of course I carry string at all times, doesn’t everyone? Likewise sewing kit, pen-knife, notebook, pencils, nuts & raisins, magic fire, teabags, pencil sharpener, mana, coins, and a mug. I tend to have accumulated a reasonable pamphlet collection by the end of the event - then in downtime these get posted back with comments and questions.

Isca also tends to have a few small wooden puzzle-toys to fidget with at all times. These are great for moments when I am not quite sure what I should be doing, or have to sit still and listen (Isca isn’t good at this). Also useful for striking up a conversation by asking the person sat next to you if they can solve the puzzle. Puzzle-toys are cheap enough on Ebay that I can give them away frequently.

Mostly I pack copies of my books for sale

There is a part one as well, but that’s not shown in that photo.

oh, and various pamphlets if I can write any interesting analysis on the winds of war posts.

Various other stuff may or may not be written depending on my time between events and inspiration. I’ve got the concepts for at least 3 new papers…

I also try to carry a (currently missing) ICish timepiece[1], and other minor accessories such as fountain pens and notebooks.

[1] There probably a rant in there somewhere about the fact I shouldn’t need one, but it’s LARP not re-enactment so I’ll just point out it is a shame the clock in Hub can’t be more of a IC focal point. 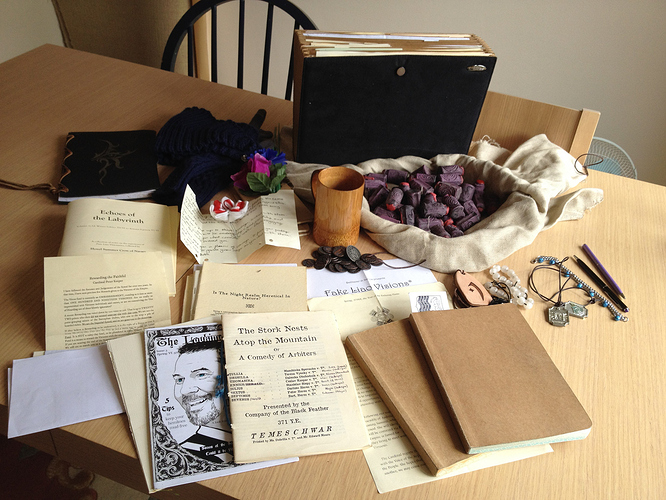 The concertina file at the top is full of papers, and yes that is a stupid amount of liao. Not pictured is the little plastic bottle of neat Ribena that I use for physrepping drinking it on the field. (Mainly because the Ribena I had from the last event had somehow gone off. Ewwww.)

I keep a hamper of personal effects:

Jewellery box with spare ear cuffs and all the various pieces that other characters have gifted.
IC letters received.
Copies of my books on strategy or tactics (either copies of my own to give away or other peoples’ that I have collected).
Maps of the Empire, plus pamphlets on foreign nations.
Copies of old military and scrying reports.
Spare garters and laces for doublet and hose.
Mirror.
Dramaturgy masks.
Notebook with lyrics to songs and the banner oath.
Notebook for Military Council.
Copies of both Looking Glass and Pledge.
Writing box containing blank paper, dip pen, ink pot, seal and wax.
Dried flowers from friends in other nations.
Tiny bells for giving to others.

Going through the hamper is the fastest way to remember the character’s history, relationships and headspace. 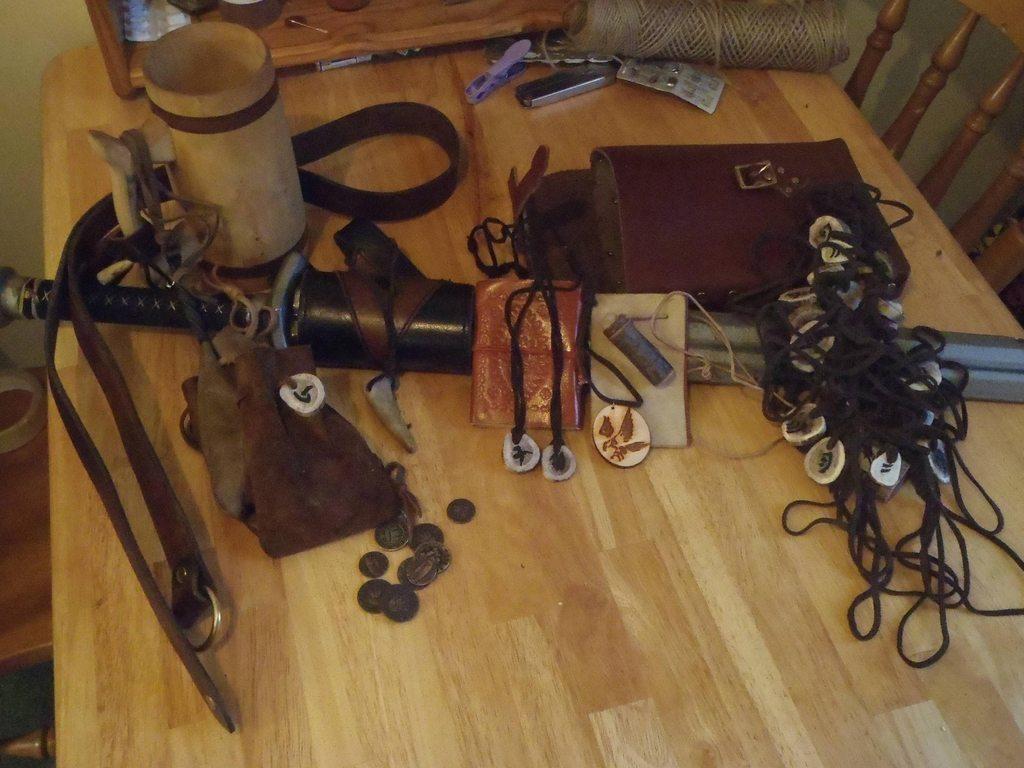 I have a valuables pouch which never leaves my side IC - currently this contains:

)
one dose of liau for some reason

I also carry an IC bag with my larger ritual props (maps for scrying, navigational instruments for casting Sulars Promise, lenses for casting Eternal River) and the inevitable pile of paperwork I collect over the course of an event, with room left over for a bottle of wine/thermos of coffee depending on my mood/time of day…

I also tend to have a lantern attached to my sash, and at least one IC drinking vessel on me…

Rod - a particularly sweet little weapon, 42" thing, not as balanced as a rapier but gives me a pretty ludicrous reach. Modded with a tankard loop because it falls through belt loops and doesn’t have a scabbard.
Ring - the Ring of Atun my wife made me

Tiny, minimum length knife for situations where I need a Horizon’s Razor Edge or Swan’s Cruel Wing
Mana wallet - I have a little slimline thing (OC, a cigarette case) which holds enough mana to power a Conclave argument, a small ritual or quite a substantial fight. It also helps me persuade people I am less prosperous than I am, because I can conspicuously give them my last mana crystal.
Ritual potions, for serious emergencies like ‘it’s quarter to timeout, the Chain is already spent and we need to cast Rivers with the four of us left on the field’
Salve - my bark splits and itches and bleeds, and this helps it (by which I mean, I’m always carrying a bottle of fake blood - if my physreps start falling off I glue them back on with fake blood)
Old, battered notebook and a succession of pens and pencils
Mirrors
Lightstone (reminds me, I need a new lightstone)
Paper
Songsheets
Pamphlets (mine)
Pamphlets (others’)
Historical documents (copies)

Money - every time this goes over a crown I skim that off and shove it into Spire funds
Resources - ambergelt specifically
Mana - mana comes, mana goes, I’m often carrying 20-30
Liao - it’s worth having some lying around
Crystals for ritualing, also for helping persuade people I am more prosperous than I am because look at this large heavy box that is literally bursting open with wealth

This may not be everything, there’s usually something that’s fallen down to the bottom of the kit basket.

There’s money, liao, books and pens, song books, a couple of letters (not mine but I’m keeping them safe), a Vigilance peg (clearly not Vigilant enough; I’m keeping it as a reminder), the all important hand-sanitiser, Varushkan hat, mana crystal physrep (even though I don’t have any actual mana crystals), two timekeeping devices, plus two flowers - the red one for Courage, one tiny glass one for Wisdom that is hiding in the brown pouch for protection - that two special Urizen friends gave me last event. 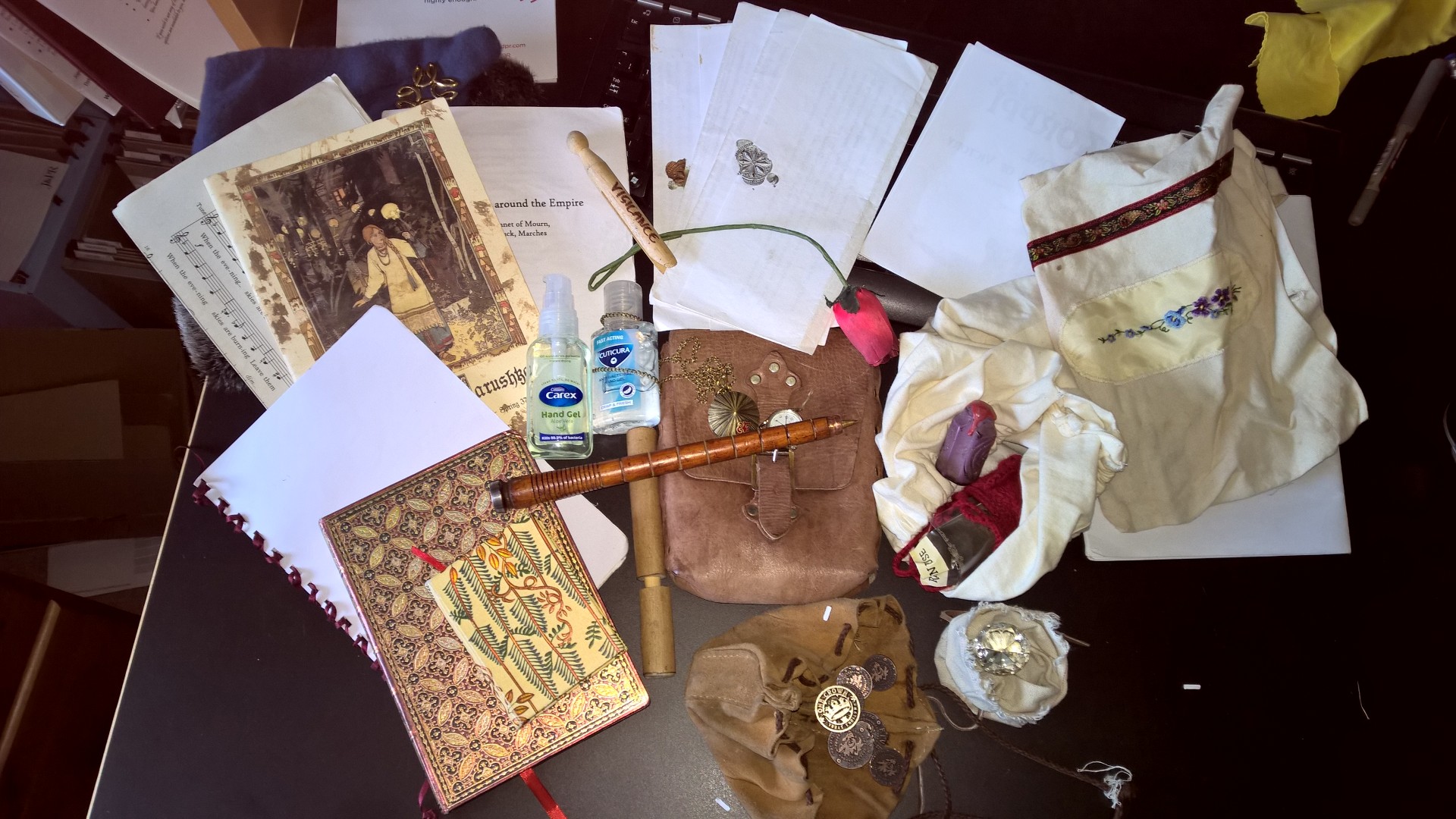 Let’s see, my IC EDC, in no particular order:
c1.staticflickr.com/1/475/19053116841_1fc21f3c9f_c.jpgDSCF7193 by A wride, on Flickr
[ul]]Dagger. - I only carry my sword when I’m expecting trouble. Anvil is pretty safe most of the time, and it rather gets in my way. The dagger means I’m never totally unarmed./:m]
]Money pouch (hopefully with money)/:m]
]Surgical kit/:m]
]Tankard/:m]
]Pens/:m]
]Notebook - split into sections. Front for general notes, back for medical learnings./:m]
]A bandage or two/:m]
]Whatever potions I have to hand, one in a quick use neck holder/:m]
]Hospital membership tag/:m]
]Rags (for minor clean-up duties)/:m]
]Tinderbox (everlasting match)/:m]
]Small folding knife (opinel #9 in carbon steel)/:m][/ul]

When I’m acting in my role as retainer, I’ll be carrying a second notebook, which is owned by my principal, and used by her when I’m not around.

After every event I take a photo of the bits of tatt my orc Skywise Gralka has collected,
here’s what came back with me from last Empire (Autumn 379 YE):

This is a lovely idea. Here’s what the innards if a Night ritualist’s bag look like: http://i.imgur.com/VpPhyeJ.jpg

Mana wallet - I have a little slimline thing (OC, a cigarette case) which holds enough mana to power a Conclave argument, a small ritual or quite a substantial fight. It also helps me persuade people I am less prosperous than I am, because I can conspicuously give them my last mana crystal.

Or perhaps giving away the last one is prosperous:
profounddecisions.co.uk/empi … Prosperity
“There are three things that should never be made: Food that goes uneaten, coin that goes unspent and magic that goes unused.”

Mana wallet - I have a little slimline thing (OC, a cigarette case) which holds enough mana to power a Conclave argument, a small ritual or quite a substantial fight. It also helps me persuade people I am less prosperous than I am, because I can conspicuously give them my last mana crystal.

Or perhaps giving away the last one is prosperous:
profounddecisions.co.uk/empi … Prosperity
“There are three things that should never be made: Food that goes uneaten, coin that goes unspent and magic that goes unused.”[/quote]

Oh, it’s going to be spent some day. With Poise.

Knowing me, probably on a Conclave speech.

I love this thread. Not least because Asher was packing my book!

This is the assorted junk carried by a Varushkan Bargainer-Senator. 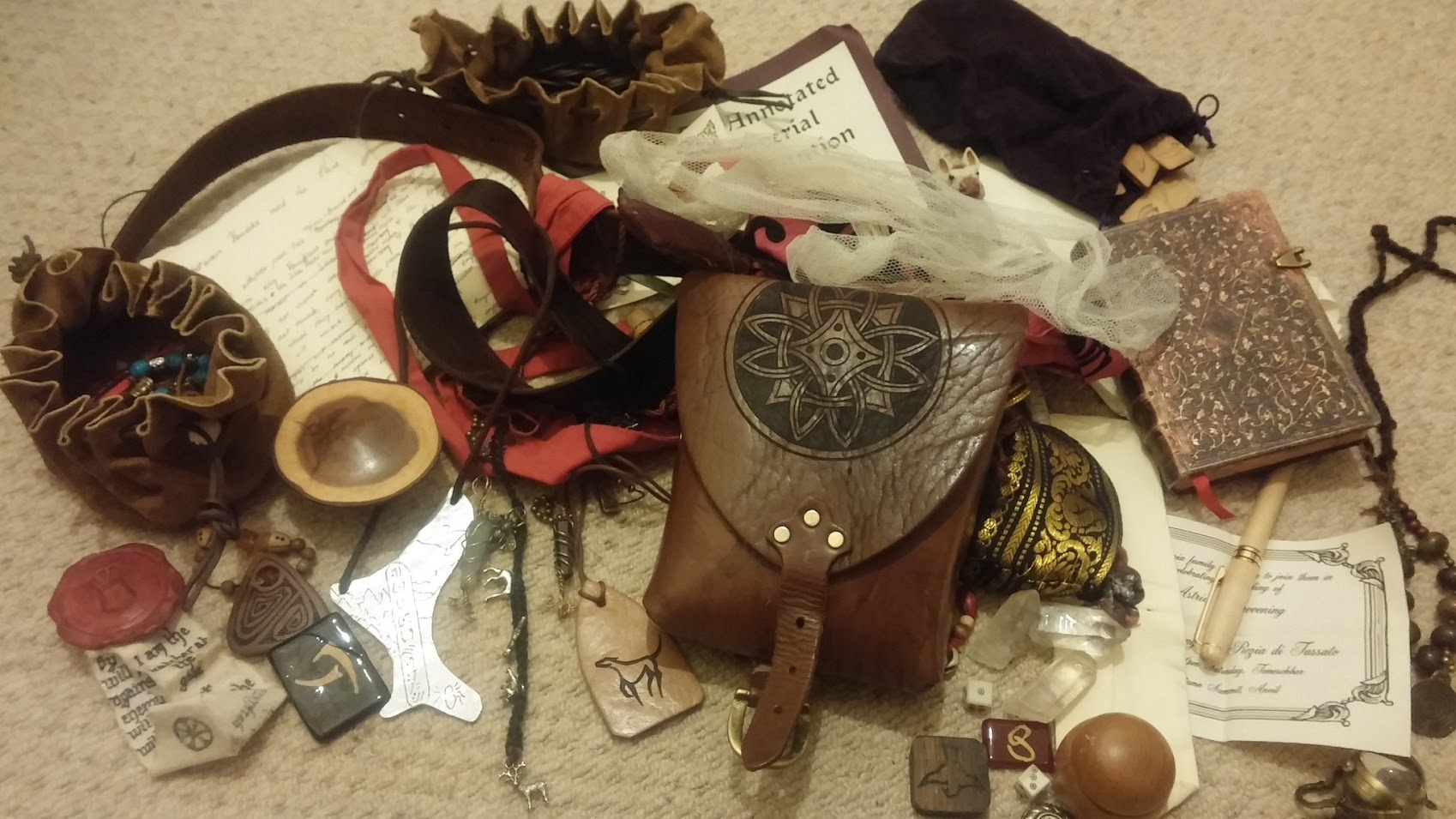 No pictures (at least for now) but things that Niccolo usually carries on him include:

Notebook and a few loose blank sheets of paper
At least one pen
Sword and curly buckler
Coins
Mana
A mirror or two
Pocket-watch
Visiting-cards with the Four Rivers Theatre emblem
Various bits of paperwork, generally about a half-inch thickness of A6 (or folded to A6), and sometimes an A5 pamphlet or something in the bigger pouch.
Eight-inch knife (so many times I’ve lent it to a physick…)
Handkerchief
Sometimes a mask
Gloves if it’s cold
Hip-flask of spirit sometimes

Violin and music usually stay in the tent most of the time, along with most of the troupe’s masks and props and all the other stuff that fills up the car for the journey. 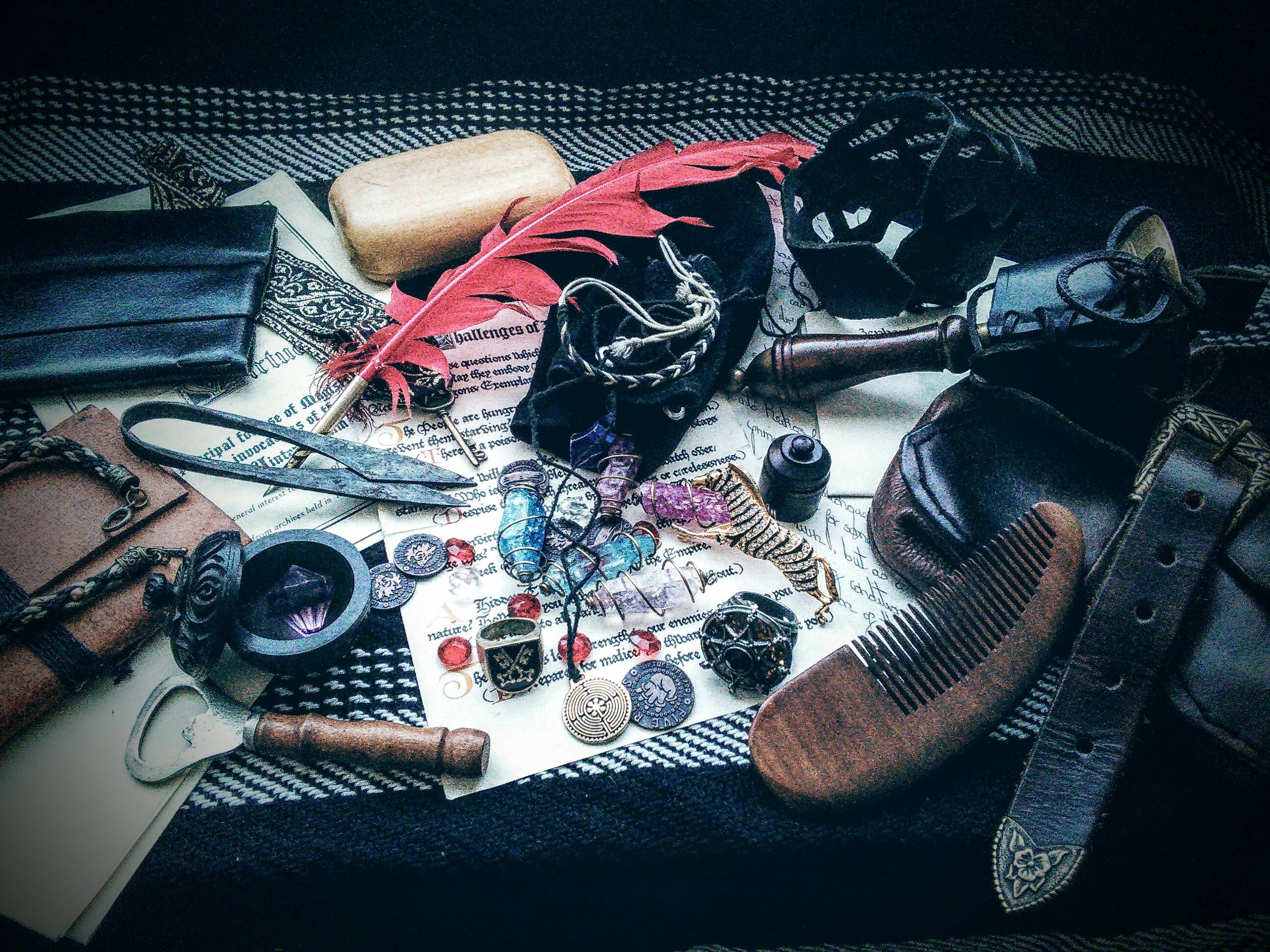