What makes a Marcher look magical?

The Marches. Land of farms, whacking great dolmens and down to earth wizzards.
But what says “Landskeeper”, “Mummer” or “Hedge Magician” to you? If you wanted to advertise your PC as a magical sort of Marcher, what would you wear or carry do that?

The wiki doesn’t have anything to suggest as a distinctive magician look, or any good pictures of PCs, unlike the other archetypes.

Some landskeepers wear robes, similar to the monk, but a jerkin, shirt and hose, with rolled-up sleeves is just as good an alternative. A landskeeper is well used to hard work in the fields and their look reflects that.

So what do you think is a good photo of a blatant Marcher magician, or a characteristic bit of kit?

There’s a wonderful irony I recently realised. Most of the “go-to” things that the British culture associate with magicians have been appropriated by other Nations. This leaves the Nation inspired by British Pastoralism without any cultural appropriation of their own. I get round this by using as many of the “go-to” things, but all in a small way.
Runes - could be Wintermark, but I have a few and subtle
Staff - could be Urizen, but mine is relatively simple
Mask - could be League, but mine is straw and beadwork
Robes - not certain where these could be, but mine are shades of brown
Oh… also this one. He’s arrogant enough to think of himself as the poster boy for Landskeepers. 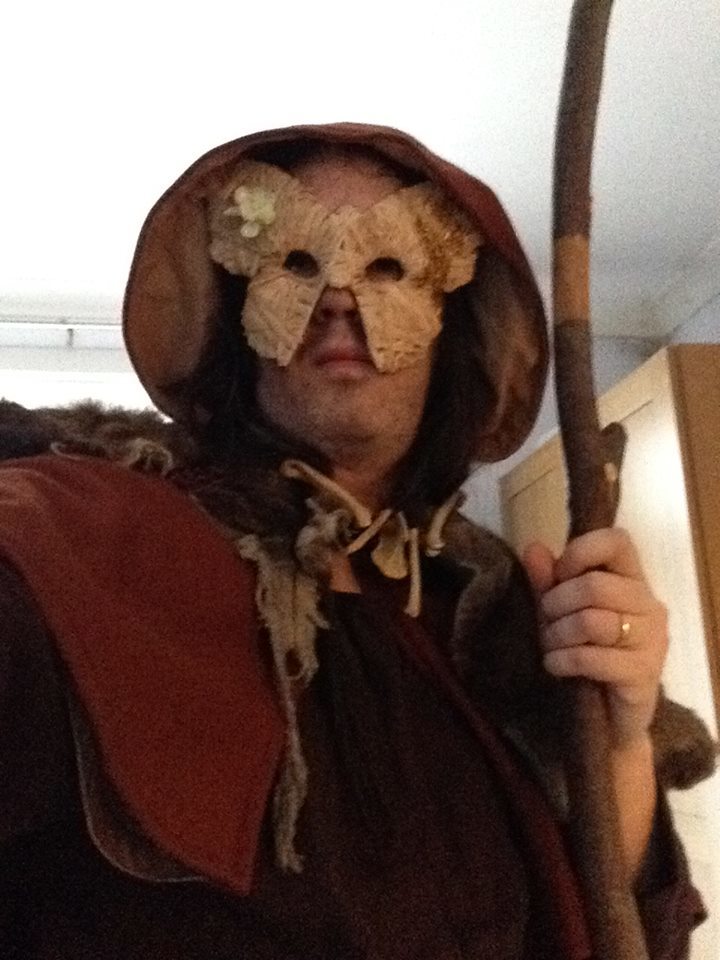 Would stealing from traditional Morris costume for Mummers work?

All the dangly, jingly types are so very Mummer, and have the advantage of being quite visually distinctive from other Marchers and other Magicians.

I don’t play a marcher but I have thinking about the marcher magical traditions a lot recently due to plot, so I have some thoughts. Mostly on Landskeepers, as honestly
Generally if struggling with the national magic brief (from the point of few of the nation where our magic is around weaving cloth.) I find looking heavily at the hearth magic for inspiration really helpful.

Dolmens and chalk figures
Okay pulling a set of standing stones around with you isn’t really feasible, but stone doesn’t really come up that much in other nations briefs and stone with an engraved or chalked pattern on it would shout Landskeeper to me, even if it was only a small piece.
Poppets
A Poppet clearly says marcher, but I can’t see much reason a normal adult would have more than one. Displaying a few of them would be a way of saying wizard to me. If you could work out a way of making them cheaply turn up, and give a few away at key magical points.
A little point of characterisation is that the marcher magical traditions are all itinerant, (I’m not sure if hedge wizards actually are a full tradition, or a formalised breach of them.) You are tapping into the wandering magic user more than anyone but Navarr. Having your ritual props on you at all times, might help with both distinguishing from other marchers and from other nations mages.
On that note maybe make the cloak the focal point of the costume, something practical/warm preferably somewhat waterproof, but with some sign that says wizard even if that’s all they can see. It’s helpful if you suddenly turn up at a farm to be clearly a landskeeper, but also it’s often bloody wet.

I think some of those symbols you list are somewhat generic both robes and staffs, I think are pretty general common across the empire. The problem with robes is there is an awful lot of the empire that wears them, in many cases any real association with magic, marcher monks, generic Dawn or highguard costume etc.
Staffs are pretty common across the empire cultures, it’s pretty much a universal sign of wizard that can potentially display nation depending on the type of staff. - I would not look at that staff and think Urizen.
Actually on Runes I know there is leaguish set of runes floating around that has a more type face atheistic than the wintermark originals. It might be possible to modify the style while keeping the forms the same in a way which is could specifically suggest marcher.
My personal thoughts would to go stylistically closer to patterns I have seen on standing stones. Removing the angles in favour of curves. Having played about with this a little on the back of the envelope, I think designing a set that looked good*, clearly mapped to the runes while being aesthetically distinct should be possible. If people were interested I could try to do a version that is slightly neater, and less scribbles.

*okay I haven’t quite managed to get a version of mawring or zorech that I am happy with,

I love those runes. I’m a huge fan of matching rune style to medium and nation - I have a pretty consistent hand for the runes written in fountain pen, for example - and these are great.

For Zorech, it might be worth seeing if you can get one curl to enfold the other one, or maybe just make the outer line have a slight curve to the end but no full curl.